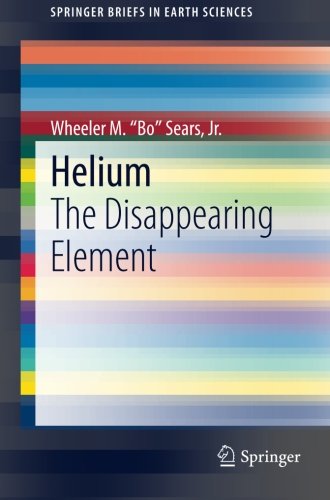 Brand : Wheeler M Sears
from USA
to Mexico
in 5-8 days
At your doorstep by Aug 02  to Aug 05 with standard delivery

The subject of the book is helium, the element, and its use in myriad applications including MRI machines, particle accelerators, space telescopes, and of course balloons and blimps. It was at the birth of our Universe, or the Big Bang, where the majority of cosmic helium was created; and stellar helium production continues. Although helium is the second most abundant element in the Universe, it is actually quite rare here on Earth and only exists because of radioactive elements deep within the Earth. This book includes a detailed history of the discovery of helium, of the commercial industry built around it, how the helium we actually encounter is produced within the Earth, and the state of the helium industry today. The gas that most people associate with birthday party balloons is running out. “Who cares?” you might ask. Well, without helium, MRI machines could not function, rockets could not go into space, particle accelerators such as those used by CERN could not operate, fiber optic cables would not exist, and semiconductor chips could not be made…the list goes on and on.
Show More
Reviews