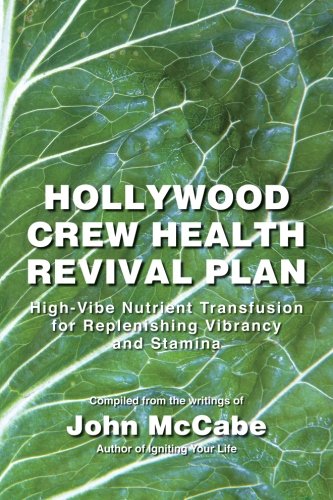 Alarmed by the number of heart attack deaths among their co-workers, his friends working in the film industry encouraged John McCabe to write a book specifically for the overworked, overfed, sleep-deprived craftspeople working as “crew” behind the scenes of Hollywood TV and film productions. As an answer, McCabe compiled this book using some of his previous writings combined with new writings. He sprinkled the text with a wide variety of informative quotations from various experts and studies on health, nutrition, medicine, and science. While the film industry might be perceived as glamorous, the reality is that working as crew often involves long days and sleep deprivation for months on end. Crew then experience the health issues relating to their exhaustive work hours, sleeping patterns, dietary choices, and lack of exercise. Crew working enough years to gain full pension often do not live long after retirement. The often repeated example is that of the many assistant directors who do not live long beyond retirement. Some die of heart attacks while others experience chronic and degenerative diseases common among those who spent years eating what has become the standard American diet of toxic meals rich in meat, dairy, eggs, salt, oil, sugar, fried foods, bleached grains, gluten, synthetic chemical additives, and farming chemical residues. This book details how to avoid common chronic and degenerative diseases – the vast majority of which are diet and lifestyle related. This is not a book about counting calories or following set meal plans. Instead, it is about being pro-active in health while avoiding disease-inducing foods, and choosing clean foods that resonate with truly vibrant living. ••• McCabe is the author of Raw Vegan Easy Recipes, Igniting Your Life, Sunfood Diet Infusion, and other books relating to thought, food, health, animal welfare, wildlife, the environment, and commercialized culture. This is his tenth published book.
Show More
Reviews